5 Ways to Tighten Up Your Plot

The Ramifications of Time Travel via tapiture.com

There are many different successful writing styles that get books to fly off the shelves, but most successful fiction books need one thing to really work: a solid plot.  In my opinion, calling an author a tight plotter is one of the highest compliments.  A few authors that are great at this are Stephen King, Suzanne Collins, and George RR Martin, among others.

With a tight plotter, we’re hooked into the story, we encounter some crazy obstacles along the way (that totally make sense at the end of the story – I’m waiting on this one with Game of Thrones, Mr. Martin), and we solve whatever we’ve come to solve, while tying up most loose ends in ways that push the plot forward.  I like to think of it as a complex puzzle that doesn’t fully make sense until you put in the last few pieces – that’s some classy plotting.

How can I tighten up my plot?  Of course, I can’t give any in-depth advice about this without actually reading what you’ve written.  However, a few things generally always apply.

These ideas are just the tip of the iceberg.  What else can we do to tighten up plot?  What can we add/take out/change to make our plots tighter?

What Do Your Fears Say About You? 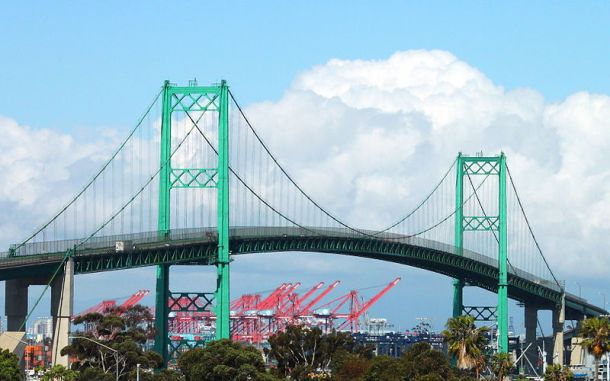 This past week, I had to go to a restaurant in San Pedro for a work event.  San Pedro is the hub of the Port of LA/Long Beach, the largest port area on the west coast and home to the Vincent Thomas Bridge.  I freaked out a little on the way there when I saw the words “Vincent Thomas Bridge” on the directions.

I’m not normally afraid of heights, but this bridge FREAKS ME OUT because it is so high and so curved.  It feels like you’re looking over the edge of the horizon into nothingness.  It is 185 feet up at its highest point (egads!!!  That’s like 15 stories!).  I avoid it.  Avoiding it is not usually a problem since I rarely go down there, but I couldn’t skip this event.  I told myself I would get in the middle lane and grit my teeth and be done with it.  Fortunately, when I looked at the directions more closely, I realized I was just passing by the bridge.  At the event, my coworker A, who is more afraid of heights than I am, told my boss R and me (only half kidding) that she was going to turn around and not come if she had to drive over that bridge.  R, on the other hand, said he’d been really excited when he thought he might get to go over the bridge (at this point, A and I both gave him looks of horror).

This got me thinking about fear and how we react when we’re afraid.  My coworker A, my boss R, and I all had different reactions to the same event, having to drive over this crazy bridge.  A was planning to turn around and go home; I was going to grit my teeth and push through; and R was going to enjoy it.  How someone reacts to something shows us more about them than if we were just to say, for example, she’s afraid of heights.

In Jurassic Park (spoilers ahead, y’all), Michael Crichton uses fear to reveal traits about nearly every character.  Early on, after T-Rex shows up, the lawyer runs away and leaves the 2 kids all by themselves.  This underlines for us that the lawyer is a cowardly punk, and it also makes it more impressive when Dr. Grant comes to the kids’ rescue.  Crichton used this T-Rex experience to not only show us more about these 2 characters (the lawyer and Dr. Grant) but also to use the lawyer as a foil for Dr. Grant.  Later on, we see how greedy creep Dennis becomes impatient when he’s afraid – talking too much, driving erratically, and eventually bringing on his well-deserved demise.  We also come to find game keeper Muldoon is calm and collected in the face of fear; it becomes even scarier for us as the audience when the raptors have trapped Muldoon, the consummate tracker.