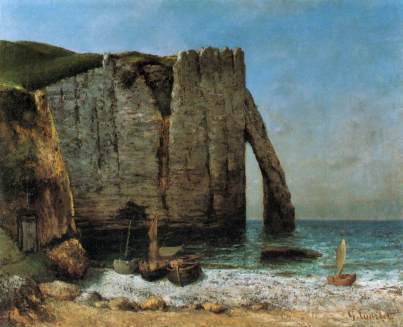 Cliffs at Étretat by Gustave Courbet via Wikimedia Commons

With National Novel Writing Month looming (frequently known as NaNoWriMo), I’ve been thinking quite a bit about outlining.  Last year, I participated in NaNoWriMo without an outline, and the results were less than stellar.  Having an outline helps me write the nitty gritty of the story itself more quickly and more cleanly.

There are all kinds of resources out there to help you outline, but what matters most is what you put inside the outline.  One of the most important things holding your plot together will be the stakes and the ensuing tension those stakes develop.  The stakes for the same situation will be completely different depending on your character.  All of the Bennet girls in Pride and Prejudice had a strong stake in finding good marriages – as soon as their father passed on, they would be penniless and basically homeless if they didn’t have a (good) husband.  On the other hand, Jem in Rachel Ward’s Numbers had no such stake in a good marriage; in fact, I can imagine her scoffing at even the idea of getting married.  The stakes are completely different based on your characters and their objectives.

According to former literary agent Mary Kole, author of Writing Irresistible Kidlit, there are two different types of stakes, public stakes and private stakes.  Private stakes impact your character’s core identity.  Your main character may become completely torn up when her family loyalty is put on the line and she is unable to fulfill her role as the protector of her family (think Katniss in Hunger Games, contemplating her death and what will happen to her family if she dies).  Public stakes, on the other hand, bring in the larger world and the character’s relationship with it.  If the Bennet girls in Pride and Prejudice don’t get married, and get married to the right kind of men, they will be pitied as burdens on the community in addition to being penniless.

Many of the best kinds of stakes are a mixture of public stakes (relationship with the world) and private stakes (personal identity).  In Numbers, if Jem doesn’t share her secret, she may not be able to unravel the mystery in time to save Spider; however, if she does share her secret, people may not believe her, causing further consequences.

It’s important to ratchet up the stakes little by little as we go along, but we also have to take care not to go too far overboard.  Too far overboard can make us move into the realm of melodrama.  Melodrama happens when the characters’ emotions run too high to match their objectives.  If Johnny scratched his hand on a rock, he’s probably going to be irritated but not irate.  If the emotions run too high to match what’s happening, we may lead readers into farce.  Sounding like a sketch on SNL by accident is much worse than sounding like one on purpose.

What are our takeaways?

What else would you add about raising the stakes?  How do you include stakes when you’re outlining?